The top headlines from May 2018 from the Latin America Clean Energy sector. Please contact Ivan Suarez if any specific topic is of particular interest to you so that he can tailor the news feed.

~ Jinko Solar made its first investment in the Southern Cone. The company financed an 80 MW solar PV plant in the San Juan province

~ Echo Energy announced a Gas discovery in onshore Argentina. In the Lower Tobífera formation, the company drilled 5,774 of depth and encountered over 130 feet of gas shows

~ Vestas added up to 106MW to its Argentinian portfolio. The company finalized two projects (53MW) with Pampa Energia, increasing its Latin American share

~ Grenergy Renovables closed the financing of its 24-MW wind project in Argentina. The backing was provided by KfW IPEX-Bank. The wind farm will sell under a 20-year PPA

~ Brazil's Petrobras reached a debt deal with Eletrobras. The renegotiation covered a US$ 5.76 billion debt owed to the state oil company. The agreement was crucial given the privatization process Eletrobras is going through

~ Hydroelectric and wind power generation (13GW added within the past 6 years) were reported to have contributed to the shrinking demand from Brazil’s gas-to-power sector, which traditionally accounted for up to 47% of demand in recent years

~ BNDES announced that it has supported 1,323 MW of wind projects through green bonds. Only in May the Development Bank raised US$ 1 billion internationally

~ Iberdrola will invest US$ 833 million in electricity distribution and wind projects in Brazil. The investment strategy will focus on Rio Grande do Norte during a period of five years

~ Brazil's Eletropaulo tender was delayed until June 4. The participating companies are: Neonergia (Iberdrola) and Enel, after Energiasa retired from the bidding process

~ Actis obtained financing for its acquisition of InterGen. Milbank, Tweed, Hadley & McCloy and Galicia Abogados assisted the PE firm in this process

~ CFE (Utility) withdrew from an auction to procure LNG supply, regasification and storage. Pemex said that CFE's absence means a decrease in the LNG volumes to be procured

~ The country took action to grow its solar capacity with a resolution that will allow distributed generation and a long-term power auction in 2018. Small-scale solar power generators (capacity up to 5 MW) will be allowed to supply energy to the national grid

~ Valero agreed to purchase Pure Biofuels Del Peru from private equity firm Pegasus Capital Advisors. This is a move from the North American firm to expand into South America

The Energy Council will be hosting a series of VIP Receptions in South America this June. Come and meet our network in Brazil, Peru, Colombia and Argentina! 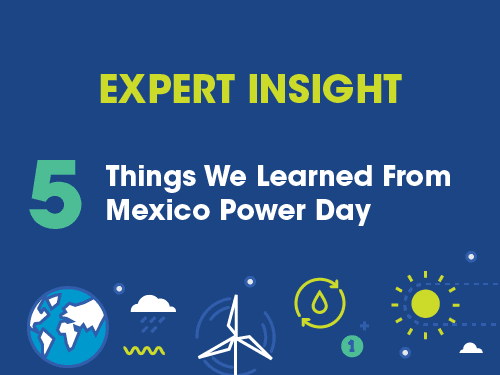