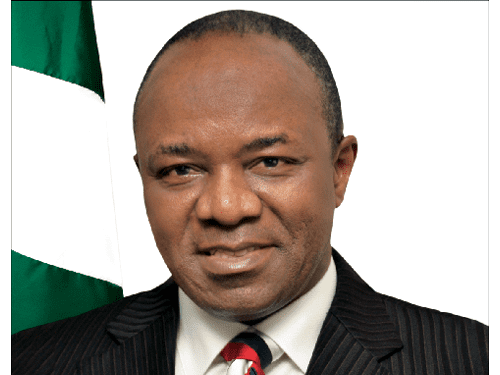 Dr. Emmanuel Ibe Kachikwu is the present Minister of State for Petroleum Resources of The Federal Republic of Nigeria and Chairman of the Board of the Nigerian National Petroleum Corporation (NNPC). He was nominated and subsequently appointed by President Muhammadu Buhari to represent his state of origin, Delta State in the President’s cabinet to oversee the daunting task of reforming and institutionalising transparency, accountability and productivity in the Nigerian oil and gas sector. As cabinet minister working directly under this key Ministry headed by the President himself, Dr. Ibe Kachikwu‘ s responsibility encompasses working in synergy with the President to evolve innovative strategies and formulation of policies aimed at sanitizing the petroleum sector of the country and returning it  to a profit generating sector that would positively impact the economy of Nigeria.

Preceding his nomination and confirmation as an Honourable Minister of the Federal Republic of Nigeria serving in the Ministry of Petroleum Resources, in August 2015 he was appointed to the position of Group Managing Director (GMD) of the Nigerian National Petroleum Corporation (NNPC) where he set in place the process leading to the on-going transformation at NNPC through the implementation of a thoroughbred strategic plan focused on transforming and reviving the beleaguered the state owned Oil Company into a major revenue and profit making enterprise for the nation. He served as Group Managing Director (GMD) for eleven (11) months and in that period under his leadership the NNPC was returned to profitability thereby turning the curve and this feat landmark feat meant that for the first time in more than a decade the National Oil Company was declaring profit. On 4th July, 2016 when he was elevated  to the position of  Chairman of the Board of the Nigerian National Petroleum Corporation (NNPC) where he superintends over the affairs of  the corporation.

Dr. Kachikwu while working as Group Managing Director, Nigerian National Petroleum Corporation came to office with a clear sense of the need for reform and did not lose time to initiate the process of change. The restructuring of NNPC saw the Corporation re-organised into five Autonomous Business Units and a lean Corporate Headquarters. The Four Autonomous Business Units (ABUs) are Upstream, Downstream, Refineries and Gas & Power Units. The lean Corporate Headquarters is made up of the Ventures Unit, GMD’s office, Finance & Accounts and Corporate Services. Clear performance targets – both financial and operational were set to accelerate the growth and profitability of the new Business Units. Emphasis is on a clear focus on commercialising the Units and making the Corporation Focused, Accountable, Competitiveness, and Transparency (FACT) based.

Prior to his appointment as Group Managing Director of the NNPC, he was Executive Vice Chairman of Mobil Producing Nigeria Unlimited and General Counsel for ExxonMobil Nigeria affiliate Upstream and Downstream Companies in Nigeria. In his position as Vice Chairman and General Counsel of ExxonMobil in Nigeria, he oversaw the compliance programs of ExxonMobil in Nigeria and offered advice on issues related to adherence with compliance regulations and anti-corruption laws for the company in Africa.

This role afforded him the opportunity to set major policy plans on, government relationship, investment policy and corporate governance for ExxonMobil in Africa as well as Influence investment from ExxonMobil Group into the continent and in extension Nigeria to the tune of over $15 billion. Having played significant roles in the oil sector for over thirty (30) years, Dr. Kachikwu has developed solid working relations in the Global Energy Sphere with contacts to most CEOs of large Petroleum Corporations, and Secretaries of Energy for key National Country players. His experience in the sector culminated in him being appointed the Lead Negotiator on diverse issues for ExxonMobil in Africa including conclusion of Lease Renewal Negotiations for Mobil Producing and also membership of many highly influential policy and investment teams for ExxonMobil Corporation in the process negotiating and delivering multi-billion dollar contracts for licenses, PSCs, JVs and oil contractual operations all over Africa.

Dr. Kachikwu has shown extraordinary competence in handling responsibilities in the past and this capability he modelled in his ability to efficiently manage and oversee seven (7) companies under him when he was appointed Executive Director ExxonMobil Group of Companies in 2003 as well as in 2001 when he held the forth as General Counsel/Secretary to Board Mobil Producing Nigeria Unlimited. Between 1992 and 2001, his excellence and depth in leadership was proven beyond any reasonable doubt as evidenced in his remarkable capability to set up, manage and exponentially grow diverse business concerns of his own in key areas of downstream petroleum, law practice, consultancy and publishing. Some of the companies  which he served as Chairman  & Chief Executive include Flame Petroleum & Gas Company Limited, Intel & Data Consultants Limited, True Tales Publications Limited (Publishers of Hints Magazine) and Beverly Cops & Security Company Limited.

Before his foray into managing these multibillion Naira business concerns, he was General Counsel/Legal Adviser, Texaco Nigeria and Texaco Overseas Petroleum Company, a position he held for ten (10) years spanning through a period from 1984 -1994 overseeing various company divisions including Texaco Nigeria Limited, Texaco Overseas Nigeria Petroleum Company and Texaco Agro Industries Nigeria Limited. In that period, his invaluable leadership experience was identified by three (3) well respected companies who invited him to sit on their boards in advisory capacity on secretarial and legal matters.

Dr. Kachikwu’s wealth of experience and excellence in service delivery has not gone unnoticed as he has been honoured with numerous awards which include NOPA Evergreen Icon Award (2012), The Exemplary Leadership Award PENGASSAN (2010), Humanitarian and Service to Humanity Award JCC (2011), Distinguished Humanitarian Service Award Ubulukwu Development Union (2012), Nigerian Role Model Award by NROMA (2010), Alma Mater Alumni Award for  Exemplary  Support,  University of Nigeria Nsukka (2009) just to mention a few. Of note in all these recognitions is Dr. Ibe Kachikwu being listed in the “Who is Who Africa”.

A legal luminary of great repute who has worked as an investment attorney in the United States of America (USA), Dr. Ibe Kachikwu is a world renowned expert in petroleum operations, legislation and policy issues and as a testament to this his numerous legal articles as well as some of his non-legal plays/novels have either been published or accepted for publication. He also authored several law books including the best seller – Nigerian Foreign Investment Law and Policy. Some of these publications by Dr. Kachikwu have received worldwide commendation thereby placing him as a respected leader by peers within and outside the oil industry globally and in his chosen legal profession.

Dr. Ibe Kachikwu is a distinction graduate of Law from the University of Nigeria Nsukka and Nigerian Law School. He bagged First Class degree in Law and was best graduand and multiple awards winner from both Institutions.  He bagged a Masters in Law (LLM) with special focus on Energy and Petroleum Law and Investment and a Doctorate Degree with specialization on Petroleum and Investment Law Strategies from Harvard Law School, USA where he was the best graduate with Distinction and in the process set a record time for completing Doctoral Thesis.

At the 168th Meeting of the Conference of the Organization of the Petroleum Exporting Countries (OPEC) held in Vienna, Austria, on Friday, 4th December 2015, the Conference officially released a statement to congratulate Dr. Kachikwu who was  the then President of OPEC on his appointment as Nigeria's Minister of State for Petroleum Resources by His Excellency President Muhammadu Buhari. He was until March 2016 the President of the African Petroleum Producers Association (APPA). His international diplomacy has placed Nigeria at the forefront of discussions between OPEC and Non-OPEC member countries and these consultations have greatly contributed to stabilizing the falling oil prices internationally and effectively enhanced the image of the Nigeria positively amongst the committee of nations. At the 169th meeting of OPEC member countries, Dr. Kachikwu played a key influential role in the negotiations and strategic mediation which led to the appointment of a Nigerian as the current Secretary – General of OPEC.

Dr. Kachikwu has a flair for Literature and Creative writing which has led to the churning out of ideas for magazines like Hints, Family, Beauty Box and Complete Fashion magazines. He is a titled Chief with various influential titles which include Isagba of Ezechime Clan conferred on him by twelve (12) villages in Delta North, Gbadegun of Owo, Owo Kingdom and Odogwu of Onicha-Ugbo.  Dr. Kachikwu is married with children.