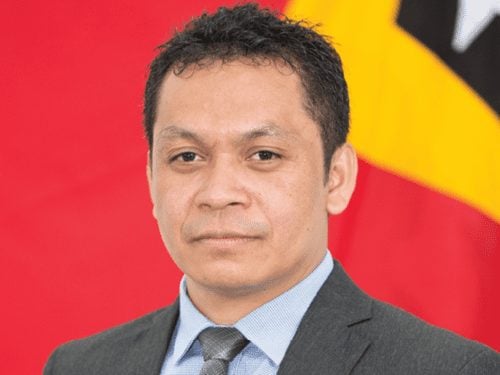 Mr. Gualdino do Carmo da Silva, is currently as a President of Autoridade Nacional do Petróleo e Minerais (ANPM) or the National Petroleum and Mineral Authority of the Ministry of Petroleum and Mineral Authority. ANPM is Timor-Leste public institution, created under Decree Law No. 27/2019 of 27th August, 2nd amendment of Decree Law No.20/2008 of 19th June, on the Autoridade Nacional do Petróleo, responsible of managing and regulating petroleum and mining activities in Timor-Leste area, both offshore and onshore and in the Joint Petroleum Development Area (JPDA) in accordance with the Decree Law on the establishment of the ANPM, the Timor-Leste Petroleum Activities Law, The Timor Sea Treaty and the Mining Code.

Mr. Gualdino is also currently hold the position as a chair of Board of Directors at the ANPM. He joined the Timor Sea Designated Authority (TSDA), the former ANPM in the year 2006-2007 as a Geologist officer and in 2007 he was selected as Executive Director of TSDA to 31 June 2008. In the same year of 2008 he was nominated as a President of Autoridade Nacional do Petróleo (ANP) from 1st of July until Present, amendment from ANP to ANPM as stated above.

During his role as Executive Director and President of ANPM Mr. Gualdino has also been travelling around world and representing his organization speaking at more than 25 various International oil and gas conferences as a key note and guest speaker, throughout Asia, Australasia, Europe and Africa.
Mr. Gualdino did his undergraduate studies in Bachelor of Geologist at RMT Melbourne University, Melbourne, Australia.

Dino will be speaking at the 2019 World Energy Capital Assembly