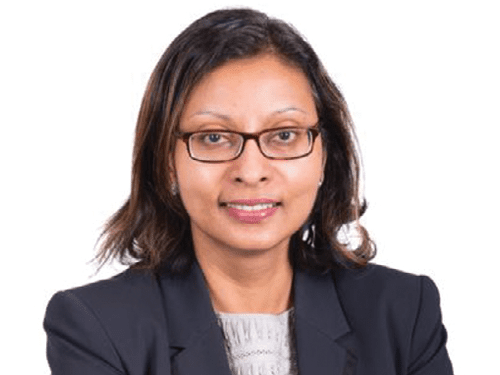 Fathima Hussain is Managing Director and Global Head of the Oil & Gas Project Finance team based in London and has over 22 years banking experience in the project & structured finance arena covering Africa, Asia and Latin America. During her career, Fathima has structured and led the execution of a number of award-winning debt arranging and advisory mandates both in the upstream and downstream sectors.

Fathima Joined SCB in October 2005 and her current role primarily focuses on the origination and execution of limited recourse financings, structured financings and project advisory mandates in the Oil & Gas sector across Africa & the Middle East.

Fathima was previously with ANZ in London working on project advisory mandates, limited recourse finance and loan syndications in the Oil & Gas sector including reserves based lending, LNG, Petrochemical and Fertiliser projects with a specific focus on the Middle East & South Asia. In 2002, Fathima relocated to Singapore where she worked with the Leasing & Structured Asset Finance team primarily focusing on offshore transportation and FPSO projects across Asia.

Fathima holds a Masters degree in Economics from Cambridge University and a BSc (Hons) Degree in Financial Services and is a qualified Associate of the Chartered Institute of Bankers.