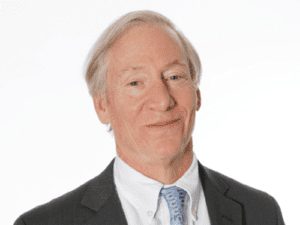 James Simpson is a partner at Winston & Strawn London LLP and co-chair of the firm’s global project finance practice.
Based in Europe since 1992, he has more than 30 years of experience, focused on the power, energy and infrastructure
sectors.

James counselled the sponsors and the project company on the Delimara 4 LNG-to-power project in Malta, and is
currently advising on an ongoing LNG import terminal and distribution facility in Italy for use in power generation, as well
as on ongoing LNG import and infrastructure projects in West Africa and South Asia. He has further advised developers
on proposed LNG import and infrastructure projects in the Mediterranean, the Middle East and East Africa. He has
extensive energy and infrastructure experience in the Middle East and North Africa, and advised on many of the first
privatisations and project financings in Central and Eastern Europe and Turkey, in power, oil and gas, water,
telecommunications, and motorways.

James is joining the 2019 Awards of Excellence Judging Panel. The panel will be meeting on Friday 18 October to review, deliberate, discuss and shortlist the nominations received from our global network.