The global energy transition firmly focused on the decarbonisation of the energy sources that are utilised to power everyday life. Official government policy in many regions around the globe supports and encourages this transition. However, the Trump administration has shied away from committing to the decarbonisation of the energy sector, with President Trump rolling back policies which have been branded ‘stifling’ by his supporters. Mr Trump confirmed that his administration would start its official pull-out from the 2015 Paris agreement, reportedly calling the Agreement “terrible, one-sided” and “a total disaster.”

Under his administration, new pipelines have been approved, while new exploration regions have been opened up and oil and gas leases have been made available. By the end of next year, the EIA forecasts US oil output will average 13.5 million b/d, accounting for more than 13% of total global oil supply and nearly all growth.

This has been accompanied by a jump in the production of natural gas, with 2018 marking the second straight year of record production. American exports of LNG to the EU have increased by 272% and reached an all-time high in March 2019.[i]

The increase in gas exports from the US has had a significant influence on the flexibility of global gas markets, with prices directly influenced by supply and demand. Being able to index against a hub price allows more market security and better market functioning, enhancing market security and reducing costs.

In contrast to official federal policy, cities all around the United States are committing to Net Zero carbon emissions by 2050. These include Boston, Los Angeles, New York City, Newburyport, Portland, San Francisco, San Jose, Santa Monica and Washington DC. Some are pressing to reach an 80% reduction in carbon emissions by 2030.

With the juxtaposition between some federal policy and state policy, there is potentially a big question around the trends that will be determined by investors in these sectors. Will pure financial considerations guide investors? Will the increased global preference for gas influence investment trends in the US? And what role, if any, will societal pressure play in the outcomes?

Global energy consumption is predicted to rise to 100,000TWh by 2050 – figures experts predict cannot be met by renewable energy alone. It is likely; therefore, that fossil fuels will still need to be used to continue meeting demand.

In 2018 renewable energy generation reached a maximum of 1,850TWh – current predictions put the capacity of renewables to reach that level of generation at 180-years at current levels of investment. Even if the investment were trebled to $1 trillion annually, it is anticipated that a minimum of 55 years would be needed to match demand. What can be done to meet both the demand and the desire for massive decarbonisation? And how do these impact oil and gas majors?

Two of the most obvious strategies will be to reduce emissions and improve efficiencies. Another is to diversify focus – a tactic many large oil and gas companies around the world are pursuing. Investing in low carbon technologies such as renewable energy is bringing an element of “acceptability” to an industry that is increasingly at the negative end of climate coverage.

ExxonMobil, Chevron and Occidental, for instance, have joined the Oil and Gas Climate Initiative, legitimising their role in a shifting energy market and positioning themselves as part of the solution to climate change.

The irony of the position in which oil and gas companies find themselves is well illustrated by Neil Beveridge, an analyst at Bernstein, a Wall Street research firm. Beveridge notes that the oil and gas sector is close to being shunned by environmentalists and some investors, but, is at the same time, “pretty essential to making the world go around.”

How are the oil and gas players adapting?

Chevron, for instance, is embracing a philosophy of making its operations as efficient as it can, reducing emissions as much as possible. The leadership at the company argue that they can meet climate change goals while increasing oil and gas output.

According to Michael Rubio, general manager for environmental, social and governance engagement: “You can increase your fossil-fuel production, deliver superior returns for your shareholders, and still be compliant with Paris.“

Critics, like the Environment Defence Fund, however, are sceptical, citing the levels of investment into emissions reductions, renewable energy or efficiency increases as being minimal compared to the investments made into oil and gas projects.

The $5.8 billion spent between 2016 and 2018 on alternative energy only accounts for about 5% of the total outlay on oil and gas deal and exploration undertaken by seven of the major oil companies. Shell, for instance, is spending $2 billion on alternative or new energy investment – out of an annual $25 billion or more.

This is not an insignificant amount in a market which is fraught with uncertainties. Oil and gas companies are navigating unfamiliar territory and balancing two opposing scenarios. In one, investors make a move away from emission producing sectors such as oil and gas. Yet, in another, investors accuse them of wasting money on non-core investments that are negatively impacting returns. This juxtaposition, perhaps more than anything else, outlines the dilemma that oil and gas companies face with at the moment.

Bigger institutional investors are already giving a good indication of the direction in which they are heading. Norway announced that its $1 trillion government-owned investment fund would divest itself of 134 companies that develop oil and gas – including Tullow Oil, Premier Oil, Soco International, Ophir Energy and Nostrum Oil & Gas – in efforts to “reduce its exposure to a permanent oil price decline.” Also, it is the intention of the fund to instead invest upwards of $14 billion in clean energy projects instead.

The Norwegian fund managers further confirmed that they would retain their interests in Shell and BP due to their renewable energy divisions.

The World Bank has now also announced plans to cease financing upstream oil and gas after 2019 to bring its lending in line with the Paris Climate Agreement.

Ireland too has joined the move; while not a significant holder of oil reserves, Ireland’s parliament has voted to divest all fossil fuel investments. Notably, they plan to ban all new such investments from its €8 billion sovereign wealth fund.

Non-profit organisation Ceres, which manages in excess of $26 trillion in assets has announced plans to form “a multi-million dollar centre to ramp up efforts to transform the practices and policies that govern capital markets. The aim is to accelerate wholesale action on reducing the worst financial impacts of the global climate crisis and other sustainability threats.” One of the ways the Ceres Accelerator plans on doing so it by working with “the world’s most influential asset owners to transition their investment portfolios to net-zero greenhouse gas emissions by 2050 and advocate for a price on carbon at the national and global levels.”

Private investors are not immune to similar pressures. According to a Wall Street Journal report: “Investors in the US… submitted 66 resolutions about climate change in the 2018 proxy season…”

“Of that total, 17 are seeking risk assessments based on the 2-degree scenario embedded in the UN’s Paris Agreement…”

This trend is undoubtedly set to rise, especially after the successful climate-change resolution seen at Exxon Mobil, Occidental and PPL in 2017. These resolutions call for annual disclosure of the impact of climate change on business and an annual report that includes environment-related scenario planning.

Oil and gas investment has already shifted direction, with Norway’s Statoil investing in Hywind, a floating wind turbine project that could drastically cut the cost and footprint of offshore wind. Eni’s New Energies division is investing €550 million installing a capacity of 463MW of solar power in Italy, Pakistan, Tunisia, Egypt and Ghana, in addition to working on biofuels and green chemicals.

“The Majors have taken the first steps to move beyond the core oil and gas business into wind and solar power, as well as energy storage,” analysts at Wood Mackenzie say, cautioning: “… most are still weighing up the options and have yet to make telling strategic moves in renewables.”

A crucial determinant of investor sentiment is still very much determined by IRR from projects. In clean energy projects, conventional thinking puts returns between 5%-9%, and are challenged by upstream oil and gas project returns.

However, even this thinking is being challenged. The Institute for Energy Economics and Financial Analysis recently reported that: “Well-managed infrastructure investments bring returns of 12% to 15% annually, with investments in renewable infrastructure producing steady, stable returns that exceed expectations.”

This sentiment is supported by Climate Action 100+, which reports that companies focused on the triple bottom line — economics, environment and social — are outperforming other broader indices.

Interestingly enough, a report released by the Carbon Tracker Initiative reveals that investors want companies to prioritise returns over growth. It has been posited that companies may have to shrink in order to offer the highest returns to shareholders. In the report Paying with fire: How oil and gas executives are rewarded for chasing growth and why shareholders could get burned, Carbon Tracker has warned that trying to maximise production puts companies at risk of overinvesting and wasting money on projects that deliver poor returns and destroy value.

In 2018, BP (along with ten other companies) refocused incentives for executives on the delivery of financial returns, instead of growth.

At the end of the day, the industry is driven by market forces, and commercial transactions determine the level and destination of oil and gas exports. Research coming out of Europe and the US in recent weeks would indicate that, while officially supporting climate decarbonisation, the ultimate decider for consumers is still price.

For oil and gas companies, the jury is still out as to how significant the impact of the energy transition and changing investor sentiment will be. Their challenge now is to remain relevant – and investable.

On Day 2 of the 2019 North America Assembly, we will be discussing Collaboration opportunities between O&G and Energy Companies – How Oil & Gas companies are embracing the energy transition and integrating Energy projects into their portfolios in order to power drilling operations 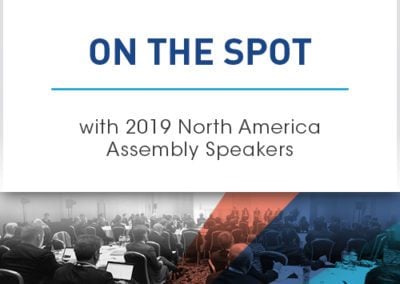 On the Spot with North America Assembly Speakers 2019

Ahead of the North America Assembly 2019, we asked select speakers what their views are on key topics. Find out more END_OF_DOCUMENT_TOKEN_TO_BE_REPLACED

Energy Transition – the US version

Royalties and Minerals – a maze of uncertainty

The United States has taken a unique view on the issues of mineral rights and developed a system that is typically only found in that country. We explore this maze of uncertainty. END_OF_DOCUMENT_TOKEN_TO_BE_REPLACED