Analysing: The Top Priorities for NOCs: A Light at the End of the Tunnel 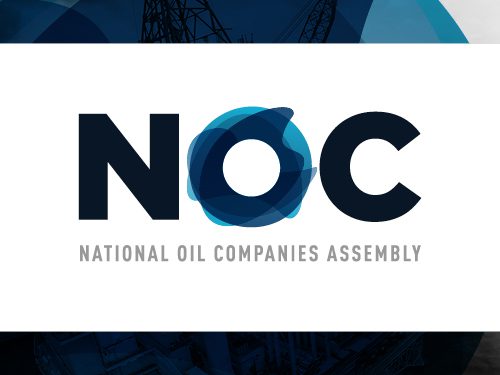 It is no secret that predicting exactly how the Oil and Gas industry will recover from the extraordinary events of 2020 is impossible. Industry analysts and leading consultants continue to routinely reach vastly differing conclusions over how demand will recover, how the price of crude will fluctuate and which companies are best placed to exploit the current market.

However, what is clear, is that lockdown measures are easing globally and oil demand is steadily rising as most regions of the world report a lowering rate of Covid-19 infection. The damage caused by the economic paralysis of most of March and April has hit NOCs in all parts of the world hard, as refinery operations had either been suspended or significantly reduced, upstream activity scaled down and projects reaching FID have dramatically reduced.

There is however, a light appearing at the end of the tunnel. China was the origin and epicentre of Covid-19 and the first country to impose strict lockdown measures. As such, China is also providing the evidence that now people are on the move again, as national demand for oil has risen sharply (to 13 million bpd, just shy of this time last year). This growth has been reflected in a simultaneous rise in the price of crude, the highest since March.

On a smaller scale, the easing of lockdown measures throughout the world has provided light relief for other NOCs, such as Ecopetrol who this week announced that its Barrancabermeja Refinery operations have increased by 22%, following the decision to reduce operations by 115,000bpd last month. Make no mistake, the oil price crash and global pandemic has caused NOCs serious suffering and damage, but the evidence is emerging that this damage is not irreparable. From conducting research with our contacts at NOCs/Majors including ADNOC, Ecopetrol, Petrobras, Pertamina, Petronas, Repsol and Equinor, we outline what we believe to be the top priorities for NOCs in the current climate.

As one Asian NOC put it when speaking with the Oil & Gas Council – “Cash really is King”. The importance of liquidity for businesses in a variety of sectors in the current climate is proving paramount. Unsurprisingly NOCs have been cutting their CAPEX across the board (approx. on average Chinese NOCs by 28%, Asia’s NOCs by 9% & LAT-AM’s NOCs by 33%) with a global minimum of $100bn less being spent this year and a forecast of $150bn less in 2021 based on a $35-40/b scenario. With depressed oil prices expected for 18 months, monetising and prioritising profitable assets becomes urgent.

Asian NOCs look to be the most aggressive in a fiscal sense with Pertamina still pledging CAPEX at $6bn as originally planned with a significant 30% cut in their OPEX. Petrobras remain committed to raising capital to reinvest in their upstream portfolio through their downstream divestment plan which has seen a delay to the initial sale of 4 refineries. With the first 4 sales now expected to go through in July, the other 4 remain on hold as they were at site-visit stage when global lockdown measures were beginning to take force. For now, some NOCs are able to generate significant revenue by selling to an ever-steadying diesel market and exporting large quantities of crude.

As ever, NOCs’ priorities will be impacted by their mandate and some will be more resilient than others to soften the blow of a low-price environment. For example, in Argentina there are advanced discussions over the internal price freezing of crude at $45/b, which in the short term protects production and jobs. While nothing can stop the crash in domestic demand due to Argentina’s strict lockdown and travel ban measures, this intervention (likely to pass via presidential decree) should not only protect the industry in the short term, but it also aids a swifter recovery and entices investment once lockdown measures are lifted.

Thailand’s PTTEP sums up the reality aptly – CEO Phongsthorn Thavisin has said in numerous online interviews that their business is protected from the crisis due to their model focusing on low production costs and high liquidity. Regardless of socio-political circumstances, in the current climate, the NOCs with high liquidity are in a strong position – cash is king.

An Oil & Gas Council article written at the beginning of this crisis read:

Two months on and the practicalities of most NOCs’ corporate strategies can begin to be identified and analysed. Much of the global economy is starting to gradually open up again and the spike in demand in China has generated optimism within the industry, reflected in the 2-month high of WTI, at the time of writing.

According to the IEA, US Gasoline demand is expected to be down 25% on May 2019, which whilst on the face of it is concerning, considering the YoY decrease in demand from April was in excess of 40%, it is further evidence that we are heading in the right direction as the world gets moving once again.

From our conversations with NOC executives, it would appear that most are preparing for an array of scenarios ranging from: a return to normal operations in Q4 2020 on the optimistic side of the scale – to a 24-month period of depressed prices and significantly reduced operations. Sub-strategies exist within this scale and it will no doubt be the strategies that are resilient to sudden change that will best adapt to the unpredictable nature of the road ahead. As mentioned, most NOCs are focusing on cost-cutting and assessing portfolio structure, however very interestingly in the case of the Chinese NOCs and Petronas, Wood Mackenzie believe we could see counter-cyclical business development as some NOCs look to broaden their overseas portfolios.

Indeed, perhaps this is a time for NOCs to think about what can be done instead of what must be done. Identifying attractive M&A opportunities in the months to come will not be difficult, however ironing out price discrepancies between buyers and sellers will be. In addition, timelines will be interesting. In the case of cash-rich NOCs, the window of opportunity is not a particularly large one, although smaller companies will be understandably eager to sell. It will therefore be interesting to see how 2H 2020 develops as NOCs play out their differing strategies to deal with a problem all oil companies share.

Where to Position a NOC in the Energy Transition

In the case of the Oil Majors and the large IOCs, the Energy Transition has been about embracing greener energy, renewable sources, ambitious net-zero targets and mass diversification into Energy Companies. TOTAL, BP, Shell and ENI have all pledged significant percentages of CAPEX in the next 30 years to ensure their portfolios reflect what they perceive to be the changing face of the Energy Mix. In the case of NOCs, the Energy Transition has broadly been approached in a different way. This is not to say that NOCs have not embraced the Energy Transition, as the evidence would suggest otherwise: Saudi Aramco has pledged a 2% yearly reduction of carbon emissions to 2030, Pemex pledged back in 2018 to reduce CO2 emissions by 15 million tons by 2021 and Gazprom that their 2030 emissions would reflect a 75% decrease from their 1990 levels. What is important to note however, is that NOC approaches to the Energy Transition have generally been focussed on harnessing the potential from renewable sources and utilising emissions reduction technologies to make their oil and gas operations more cost and energy efficient, instead of becoming producers and providers of renewables.

There are, of course, some exceptions. KPC for example have pledged that by 2030, 15% of Kuwait Energy will come from renewable sources and NOCs such as Petronas seem keen to be involved in some of the more intricate details of the Energy Transition such as the electrification of transport, by pledging to build and install 25,000 EV charging stations.

What is consistent, is the acceptance among NOCs that, while there may not be a mandate to move away from hydrocarbons, as the Energy Transition progresses – the need to make processes cleaner increases. As such, ADNOC have been proportioning significant CAPEX into digital transformation, especially in downstream assets, and embracing emissions reduction programmes such as their Carbon Capture Utilisation and Storage (CCUS) program, which they pledge to expand five-fold by 2030. The unavoidable reality is that regardless of whether the Energy Transition has been accelerated or decelerated as a result of Covid-19 and the Oil Price crash, demand for hydrocarbons will fall and their share of the energy mix will reduce and each NOC will need to decide what role they will play long-term.

NOCs have never been in need of a clear vision for their portfolios more than now. Striking the balance between prioritising low cost and short-term projects, and at the same time remaining vigilant to the inevitable M&A opportunities requiring market aggression, will be key for NOCs.

One NOC VP told the Oil & Gas Council that perhaps in the next 5 years we will see a significant increase in JVs that forge collaboration between NOCs and IOCs, on the basis that IOCs can provide capital and expertise for NOC resources. What we are seeing already is that NOCs are having to significantly cut back investment in projects that are costly and higher risk. In the short-term, analysing how NOCs allocate their expenditure gives us the clearest picture of where their asset priorities lie.

For example, in the case of Ecopetrol, CEO Felipe Bayón announced that of their budget (which was cut 30%), 80% of investment would go to protecting E&P “to protect that part of the business”, while refinery upgrades and international ventures may see delays. It is undoubtedly a troubling time for NOCs and it will force the hand of companies that have not yet decided which baskets to put their eggs in. Inextricably linked with the concept of having a robust short term strategy resilient to sudden change, the same importance can be given to the value of a profitable and prioritised asset structure.

The roadmap for NOCs is not a clear one, and it will be varied as different parts of the world recover from the socio-economic impacts of a global pandemic at different rates. This was summarised perfectly by ADNOC CEO Dr Sultan Al Jaber during a LinkedIn interview in May “As economies begin to open up, demand will follow, but the path to the next normal will not be a straight line”.

This year’s NOC Assembly will provide an unparalleled opportunity for the industry to collaborate and not only look back on the resilience and strength of companies in the midst of this crisis, but also to assess how NOCs will operate going forward – I look forward to welcoming many of you to discuss these priorities in greater detail in December. 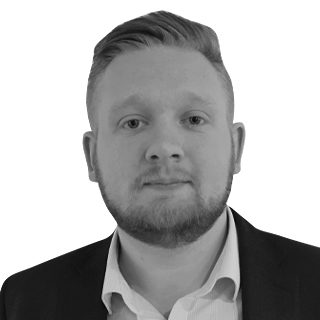 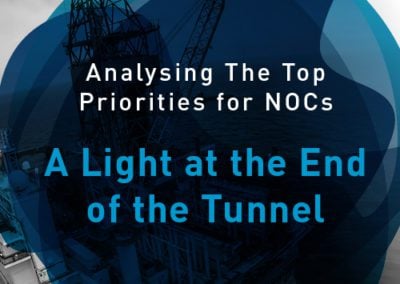 Analysing The Top Priorities for NOCs: A Light at the End of the Tunnel 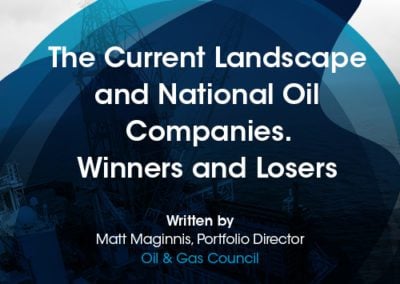 The Current Landscape and National Oil Companies. Winners and Losers