Describe the most important developments in your activities since your attendance and interview at the 2016 Oil & Gas Council.

It was a year of big progress on our Karish and Tannin assets offshore Israel. First of all, we received approval from the Israeli government to develop them. Energean Israel, a company jointly owned by Energean and Kerogen Capital, is the Operator and has a 100% working interest in the two blocks. We have also signed five Gas Sales Agreements for a total of 33BCM of gas and four MOUs with IPPs and big industrial consumers in the country, bringing competition to the Israeli market. And we have scoped out the new-build FPSO which we will use to produce from Karish

We expanded our portfolio with two more licenses onshore Western Greece and offshore Montenegro. The prospective Western Greece licenses attracted oil and gas major Repsol, which agreed to farm into two of our onshore blocks and become the Operator. During the last year we also secured an exploitation license for Katakolo, another offshore block off Western Greece, and moved forward with our ongoing investment programme in Prinos, where we have successfully completed the drilling of 6 wells so far.

What are the strategic priorities for your company in the next 12 months?

Energean’s short-term goals are to finalize Gas Sales Agreements with big gas consumers in Israel and make a Final Investment Decision (FID) on the development of the Karish and Tanin fields. We then plan to award both the contract for the FPSO build, which is currently the only such system planned for the Eastern Mediterranean, and the drilling contract, expected to commence later on in 2018. Furthermore, we intend to expand our activity in the area by participating in Israel’s ongoing licensing round and seeking other development project opportunities in the region.

In Greece, we plan to continue our drilling programme in Prinos and to begin developing the Epsilon field, which is part of the same concession. This will help us to substantially increase our production in the North Aegean Sea as part of our investment programme in the area.

In the Adriatic, we are preparing to conduct a seismic survey over the two offshore Montenegro blocks we have acquired. This is another exciting project, as the area is underexplored despite oil and gas discoveries made during drilling by previous Operators in the late 20thcentury. An independent audit from NSAI estimated 438 mmboe unrisked prospective resources in the two blocks.

Finally, we will continue seeking further investment opportunities in the Eastern Mediterranean, aiming to become the leading independent company in the region.

What differentiates your company from similar companies working in the region(s) in which you operate?

Energean is very familiar with the geology of the Eastern Mediterranean region. We have an understanding of the area’s complex geopolitical environment, as well as extensive experience in working with the local communities. We also have a strong HSE track record in operating in environmentally sensitive areas and traditional tourist destinations.

We have a proven track record of efficiently commercializing discoveries, and take a flexible approach by using the most appropriate method for the development of each field. For example, the FPSO-based solution was selected for Karish and Tanin because we concluded it has the lowest level of technical and execution risk, secures gas delivery to the market in the earliest possible time (expected to be in 2020), is the most environmentally sensitive option for the field and could in the future be used to commercialise other fields which may be discovered in the area.

One of the biggest differences between Energean and other Operators in the area is that we are totally committed to the Eastern Mediterranean; it is not just a part of our portfolio, it is the region where we have been strategically focused since the beginning of our operations and where we have been able to unlock considerable value.

Where do you see as the greatest opportunity in today’s global oil and gas markets, and how will you capitalise on this?

Rather than be dragged into discussions about the oil price, I believe that opportunities can be found under virtually any market circumstance provided that you are focused on a strategy and committed to achieve your set targets.

The low oil price has actually enabled us to grow more quickly than we might otherwise. By investing at the low point of the cycle in the E&P sector, Energean has created a balanced portfolio which contains a low risk and efficient production base that allows us to develop a number of exciting and de-risked projects. This helps us to secure near-term growth. Moreover, our exploration assets offer multiple longer-term growth opportunities in the highly prospective Eastern Mediterranean region.

We started operating ten years ago by acquiring the Prinos and South Kavala licenses, offshore Northeast Greece. These assets have been producing oil and gas since 1981 and were acquired with fairly depleted reserves following years of production. But a decade later, we have a portfolio of assets across four countries, we hold nine licenses and have 9 with 37 mmboe 2P reserves and approximately 230 mmboe 2C resources audited independently in an increasingly active region.

We have already teamed up with some leading oil and gas partners. BP has been purchasing the entire production from Prinos through a long-term offtake agreement since 2014.

We also have financial backing from major international investors. Third Point invested in Energean by acquiring a strategic stake in 2013, whilst Kerogen Capital acquired a stake in Energean Israel. EBRD has committed US$75 million to finance the development of Prinos.

In one sentence, Energean is a reliable partner offering a substantially de-risked growth story with a proven track record and approach to creating value across a balanced portfolio of assets in the prospective Eastern Mediterranean region.

Mr. Rigas is founding shareholder of Energean Oil & Gas and since 2007 has served as the company’s Chairman & CEO. Mr. Rigas is a Petroleum Engineer with a combination of oil & gas and investment banking experience.

From 1999 until 2001 Mr. Rigas was in charge of Piraeus Bank's Shipping Investment Banking division. Prior to that (1993-1999) he was Vice President of Energy & Project Finance at Chase Manhattan Bank in London where he arranged oil & gas financings in excess of $5 billion.  His career started at Arthur Andersen in 1991 as a consultant in the energy sector. 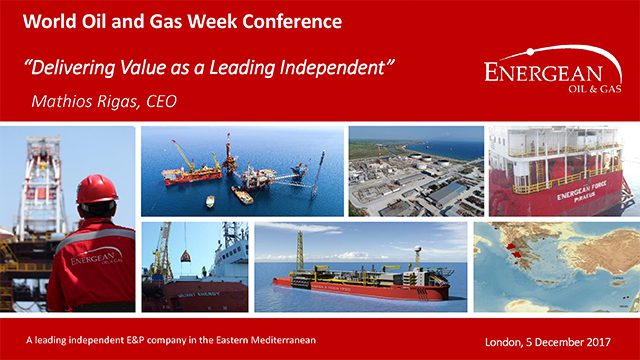