When industry players explore a new area, collating all the available data and interpreting them can be challenging and time-consuming. JumpStart integrated geoscience packages provide a comprehensive, consistent resource of easily accessible data for evaluating petroleum systems, assimilating all the available data in a specific geographical area and framing it within a geological context. These enable exploration teams to directly access the reviewed, validated, calibrated and interpreted data sets in one place, in an accessible and ready-to-use format, so saving valuable time that would otherwise be spent sourcing the information.

The major constituents of JumpStart are advanced multi-client geophysical data with gravity, magnetics, satellite imagery and seismic at the heart of it, an upgraded and ready-to-use well data set, and a coherent interpretation and evaluation framework for the basin. The first stage in a typical JumpStart project focuses on a regional geological review, amalgamating all prior information and focusing on the main petroleum geology components, such as the source rock, the reservoir, the charge, the trap and the migration pathways. This provides coherent data sets that can be used to build a framework for interpretation of the new seismic data, basin model-building and play fairway analysis.

Provision of these data packages is often part of a wider program of promotion of an area to attract investors. These programs usually also include development of the capabilities of the local workforce through knowledge-sharing and a comprehensive range of geoscience training courses that can be tailored to the local needs.

There are eight current JumpStart projects (see Figure 1), two of which are in Africa. Our Gabon package is almost complete and the final report will be available later this year, while our Mozambique project is at an early stage, with the seismic data still being acquired. A pipeline of other projects is under discussion.

The Gabon JumpStart project represents the culmination of over a decade of collaboration with the Gabonese government to promote their offshore acreage and was designed to support the 11th licensing round in the Gabon South Basin, one of the last under-explored regions of the West African Continental Margin.  This project capitalized on lessons learned from the previous licensing round, in particular by deciding to move straight to a large, top-quality 3D data set that would also be the keystone of a larger integrated geological and geophysical study of the region. All open blocks were covered by a 25,000 km2 high-resolution, broadband, 3D seismic survey. This was processed using the latest seismic pre-stack depth imaging technology, with state-of-the-art tomography and full waveform inversion velocity modeling. This provided unprecedented pre-salt imaging, as shown in Figure 2, and offered consistent and comprehensive coverage of the whole area, so that exploration teams could evaluate opportunities in less time and with increased confidence, for faster drilling decisions. 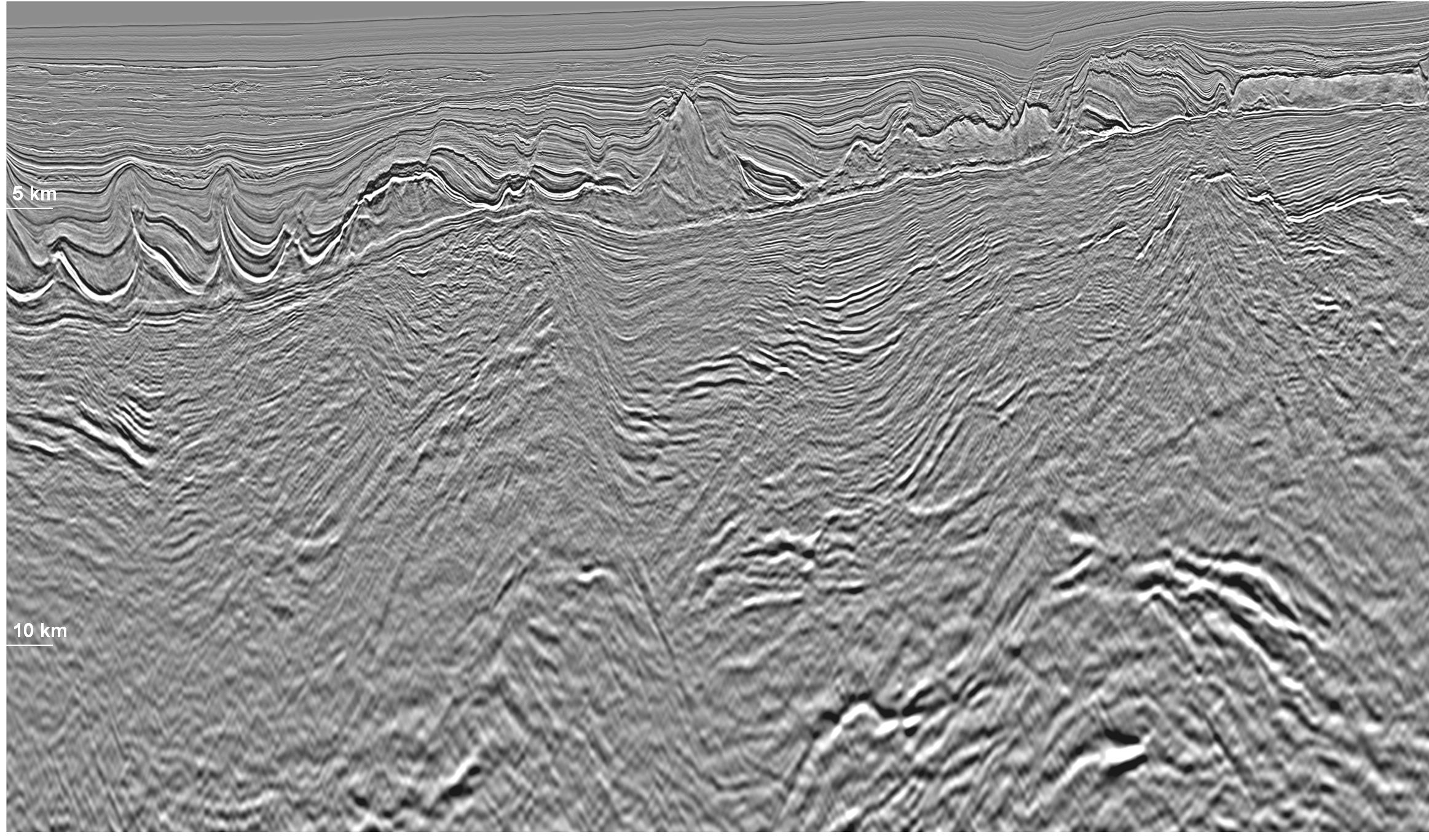 In terms of the geological history, the Gabon South Basin is a continental passive margin that is extremely deformed by halokinesis and gravitational sliding (see Figure 3).  The water depth varies from 100 m in the north-east corner, near the Gabonese coastline, to 3.5 km in the south-west.  Close to the coastline is an upslope extensional domain with normal faulting where thin salt, salt pillows and carbonate rafts (turtleback structures) dominate the area. The deep-water offshore area is a downslope compressional domain with reverse faulting, tilted salt diapirs and complex extruded salt structures created by the gravity driven system.  A transitional domain joins the extensional and compressional domains with vertically developed, salt diapirs and local welds. 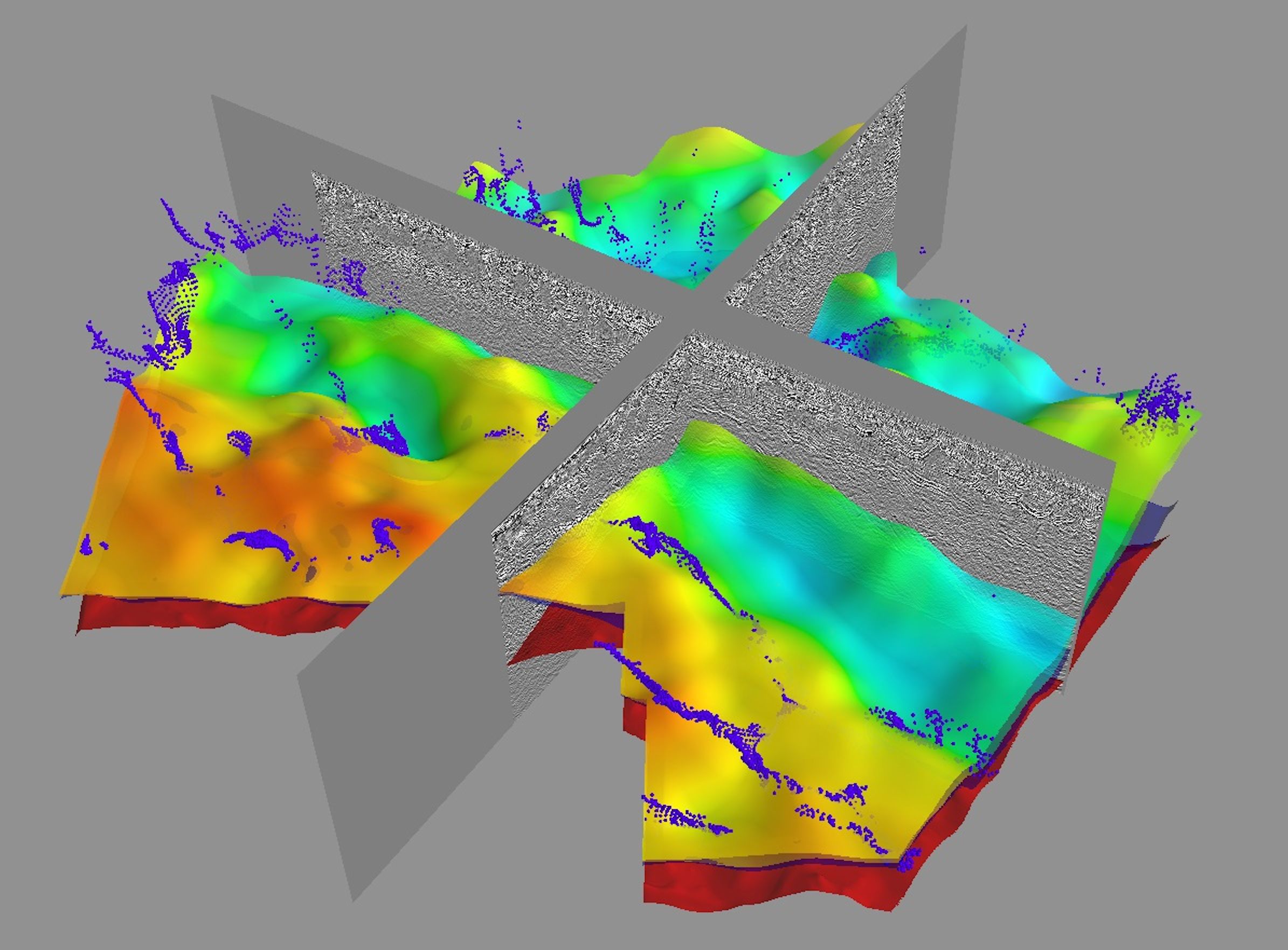 Gravity and magnetic data were acquired alongside the seismic, and integrated into the velocity modeling with re-interpreted well data. The potential fields data was also used to model crustal types and thicknesses for input into basin modeling (see Figure 4). Upper and lower crust ratios, as well as the crustal characteristics and processes in the continental-oceanic transition zones, are important for understanding the temperature regimes experienced by potential source and reservoir rocks.  Knowing the distribution of lower- or higher-density crust, and zones of higher susceptibility, provides insight into the tectonic evolution of the basin and its impact on the petroleum systems.

In parallel with the processing and interpretation of the seismic, gravity and magnetic data, CGG GeoConsulting’s Robertson group conducted a comprehensive geology review, which investigated source and reservoir rock presence and quality as well as the timing of pre-salt trap formation and its impact on the generation, migration and entrapment of hydrocarbons. It also looked at the regional geological context from a plate tectonic timing perspective and produced regional palaeogeographic maps for key periods addressing the play elements. Wells were incorporated and stratigraphy and formation tops checked for consistency.

Well data provide valuable direct samples of the subsurface and are essential for calibration of geological models. A consistent petrophysical and stratigraphic review of the available well data was undertaken, to provide a chronostratigraphic framework for improved well ties and understanding of the depositional systems. Consistent Stratigraphic Markers (CSM’s) were defined with consistent names and ages across the basin, rationalized with the seismic markers to be interpreted.

On completion of the subsurface imaging, a structural framework was interpreted to validate and calibrate all the data in the package. This enables New Venture and Exploration teams to spend their time interpreting and evaluating opportunities rather than accessing and preparing the data. Figure 5 shows part of the interpreted Top Miocene horizon with clear and detailed channeling. Prior to this project, little was known about the source rock and reservoir distribution in this deep offshore area, but the seismic imaging results indicate the presence of thick syn-rift and sag sequences below the salt, which are key intervals of the pre-salt petroleum system.

The combination of the best images of the subsurface with reservoir-quality data and value-added geoscience products have helped improve understanding of this prospective region. The attention to detail and high-quality imaging achieved by the integrated approach has paid off, as a well has recently been drilled using this data set and 90 meters of net hydrocarbon pay in good-quality reservoir sands have been discovered in the pre-salt (see http://insideoilandgas.com/index.php/news/193-petronas-announces-deepwater-oil-and-gas-discovery-offshore-gabon for details). It is anticipated that this will be just the first such discovery and may mark the beginning of a new era of pre-salt exploration and development offshore Gabon.

Acquisition of approximately 15,000 km2 of high-quality seismic, gravity and magnetic data over the Beira High in the Zambezi delta area, offshore Mozambique, is currently underway. The seismic data is being processed through a state-of-the-art broadband depth imaging sequence which will include Full-Waveform Inversion velocity modelling.

This survey will also be complemented by an integrated JumpStart package to accelerate understanding of the petroleum systems in the area. Gravity and magnetic data will be acquired alongside the seismic and integrated into the modeling for subsurface imaging. The JumpStart integrated geoscience project will draw on expertise from CGG Multi-Physics, Robertson and NPA Satellite Mapping, and include interpretation of the seismic, gravity and magnetic data with integration of all available well, seeps, and geological data.

We believe that, in future, integration of a range of geoscience data with seismic will become the gold standard for basin-scale multi-client studies. JumpStart packages enable all the data in an area to be accessed easily, already calibrated and in consistent formats, leaving more time for interpreters to work with the data, rather than looking for it. Large multi-client surveys are a cost- effective means of acquiring high-quality data, as costs can be shared and larger surveys acquired for a better overall view of the prospectivity than is generally the case with smaller proprietary surveys. Access to large surveys in both mature and virgin areas allows oil companies to reduce their exploration risk and helps to reduce the time required from license award to drilling wells. The JumpStart combination of the best seismic images with reservoir-quality data and value-added geoscience products can be used directly for exploration, play evaluation, well location optimization, geohazard identification and reservoir delineation, characterization and modeling.

CGG (www.cgg.com) is a fully integrated Geoscience company providing leading geological, geophysical and reservoir capabilities to its broad base of customers primarily from the global oil and gas industry. Through its three complementary businesses of Equipment, Acquisition and Geology, Geophysics & Reservoir (GGR), CGG brings value across all aspects of natural resource exploration and exploitation. CGG employs around 5,300 people around the world, all with a Passion for Geoscience and working together to deliver the best solutions to its customers.