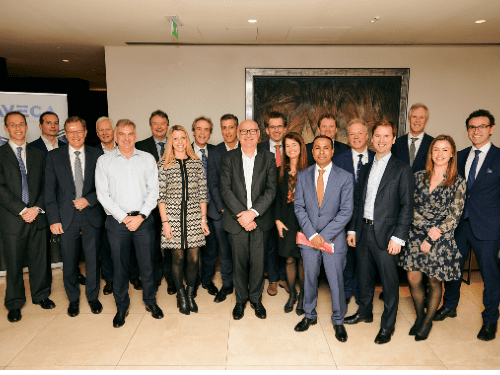 The Oil & Gas Council Advisory Board met in London late last month to discuss the year ahead. What had been expected to be a conversation dominated by the energy transition was overtaken by events and what transpired in the breakdown in OPEC+ in early March. Despite being cyclical by nature, demand was largely self-sustaining until mid-Feb. The real earthquake of the wider COVID-19 outbreak coupled with supply overhang started to impact prices as the Advisory Board met. It was decided where possible to look at macros and while appreciating the market will eliminate demand growth in 2020 the fundamental challenges remain unchanged.

Looking first at the disruption coming from electrification, in the midterm it’s about the pace of the electrification of the transport sector. Today EVs only represent a small section of the market due to pricing, charging, and infrastructure challenges but over the next 10 years we will witness a great change.

It was agreed that significant natural limits will be put on electrification by the volumes of minerals and lithium needed for the batteries. Likewise looking at electrification of power generation and specifically wind farms, there are questions surrounding where the raw materials, namely cement and metals will come from with much of the supply originating from countries with less favourable business environments. It was also noted that there is growing awareness that renewables do need to tackle some of their own issues around early generation wind turbines. There is no silver bullet and we must all work together.

Next conversations turned to the IEA. At the time of the meeting (27th February 2020) it was viewed that the IEA is out of step with their short-term projected growth not resonating with those in the room. However, since the time of the meeting, COVID-19 has gone from being a Chinese health crisis to a global health pandemic (World Health Organization 11th March). In the meantime, the IEA has released their March 2020 Oil Market Report where ‘for the first time since 2009, demand is expected to fall year-on-year, by 90 kb/d’.

The sentiment in the room surrounding coronavirus was that it is a “Black Swan” event, a blip with a short term impact primarily caused by mass overreaction. With the 2014 crisis being regarded as more destructive, long term decisions will not be impacted. It was agreed that the industry needs to look beyond coronavirus, assume it will pass, and move beyond it, even if we don’t know when.

That brought the conversation onto China, with signs of stimulus coming back in and the mood surprisingly positive, how quickly China can bounce back, and getting a handle on Chinese demand post coronavirus is key. The IEA “assume demand returns to close to normal in 2H20”. Since the meeting however the IEA estimates that global oil demand declined by 2.5 mb/d YoY in 1Q and a further 4.2 mb/d YoY in February as a whole. Testing times for all with no easy way out.

Again since the meeting, we’ve since witnessed the biggest one-day oil price fall since the early 1990s Gulf war. The crude war between Saudi Arabia and Russia plummeted the oil price to as low as $31.02 a barrel on what was dubbed ‘Black Monday’.

Having reconvened with Council members, it was agreed that the OPEC+ collapse has unleashed a battle beyond our expectations in February. 2Q Brent forecasts in the $35 to $30/bbl range now seem more accurate given that Aramco executives talked about “going to 12.3 mb/d and staying at that throughout the year”.

With demand already reeling from the coronavirus crisis we are now left considering what the lasting effect will be with inevitably growth estimates for the year being downgraded.

Despite so much uncertainty surrounding the future of the hydrocarbon industry, the reality is lifestyle expectations of the world’s 7 billion people will continue to fuel demand long-term. The downward pressure created by lower prices in 2020 may also curtail some renewable projects, as appetite for efficient yet expensive projects becomes less appealing for governments. The speed with which President Trump closed the US border to travel to and from Europe only highlights that governmental departments priorities for the first half of the year will be working in short increments, and taking a long-view is unlikely to be in vogue for some while yet.

As the largest O&G network focussed on capitalisation and development of the hydrocarbon industry, naturally conversations turned to capital markets. As prices and energy stocks plunge to around $31 a barrel it raises interesting questions. Will low oil prices blunt demand for expensive renewables? Does the superior return equation of O&G fall off a cliff with lower prices? What does all this mean for ESG?

The discussion soon turned to the question of public vs private markets. Majors will no doubt stay in the public markets but in the case of small and mid-caps, for whom it is becoming increasingly difficult to raise capital in public markets, is there a future in being listed? The attractiveness of this route is challenging with many already slashing dividends by about 90% in the current climate. As quoted during the meeting “there is nothing more beautiful than a producing asset with a long lifespan, it provides a regular dividend and is better long term than bonds”. If the bedrock of this argument is removed during a prolonged downturn where does the industry turn?

The last few weeks have shown us all how quickly things can change. With some anticipation 2020 had been predicted to be the year for the PE exit, while no one could predict a black swan event like the one we are currently facing, those in the room were already weary over the timing. The traditional route to exit for private equity is not as clear cut as it once was despite being perceived as a treasure trove only 12 months ago. Currently the IPO market seems a non-starter as valuations concerns remain. Finding public markets willing to support such a move has been in short-supply outside North America. It seems the only play currently open is to run the funds long and take the dividends as their return. This doesn’t come without its challenges for the PE firms, if they can’t exit and as such need to take the asset all the way to production, how will they finance it and do they really want to become production companies? Where does it leave the likes of Neptune, Chrysaor, and Wintershall DEA? Neptune’s recent Isabella exploration success in the central North Sea would typically have been a moment in time that going public would be considered, but these are of course atypical times with tepid interest in such deals.

Turning to debt markets it was agreed that debt finance and liquidity is available to good projects with equity, and this extends to Africa. Nevertheless, it was quoted that “mission creep creeps”, which ultimately will drive up the cost and availability of debt. With the likes of Chesapeake Energy Corp rumoured to have tapped debt restructuring advisers, the cost of debt could be driven further up.

With limited bank appetite outside of the North Sea, or for large projects, the expectation is that we will see an increasing presence of less traditional players assuming leading roles, specifically traders.

Looking to the M&A market – pricing and availability of capital, pressure on lenders to divest and less marginal private equity buyers have meant that the business model has changed.

The question of what the future for investment in the hydrocarbon industry looks like was up next for discussion. Somewhat surprisingly, even for the majors, investment in larger and longer term projects is not going to fly. Investors will continue to look at shorter positions as the longer term regulatory environment remains unclear.

Without doubt uncertainty exists in relation to societal attitudes underpinning projects that won’t come online until the end of the 2020s. It was clear from the discussions that majors are considering whether to still go ahead and sanction 6-year development projects that could take 3 further years to return the capital. Who knows what the climate change landscape will look like at the end of the next decade?

With the ESG volume of dialogue increasing, undeniably today’s hydrocarbon investors have to be responsible. With more attention to disclosure and lower carbon assets, some will get stranded. Investments in high carbon projects or those without sequestration, the Arctic and oil sands are among those under fire.

Across the table, the future of hydrocarbon funding was mixed, as companies battle with the dilemma of return to shareholders vs. being a sustainable company. Notably, last June Legal & General dropped ExxonMobil, who they deemed a climate crisis laggard. For some in the room being a good boy in oil and gas isn’t enough anymore with final E&P funds being raised. Others are reducing funding and adopting a more defensive posture offset with renewables, or continuing to invest against mounting top down pressure. Conversely, we heard from others how oil and gas funds will continue to be raised, albeit with China, Middle East and Asia increasingly bringing the cash to the table.

Ultimately for those divesting – Will their shareholders reduce their expectations on returns? And while many European investors may continue to take the moral high ground, the growth economies are grabbing the hydrocarbons.

The hydrocarbon industry has a PR problem. In a time of transition hysteria, there has never been a greater lack of unified agreement or communication about what the industry is or stands for.

Portrayed as dirty, polluting, and ultimately the culprits of climate change, there is a distinct gap between what the public and those in the industry thinks it stands for.

The reality that the industry is an enabler. The world needs and will continue to need fossil fuels in order to increase prosperity. It was unanimously agreed that the industry is struggling to get the message across about the role it plays in solving the climate change problem. Drowned in the noise of the naysayers, the message is getting lost, driving divestment.

The 2015 “Diesel gate” was referenced as an example of how the industry has failed with its communication strategy. Despite NOx being virtually eliminated still no one buys diesel cars.

“We are not yet guns and tobacco” one quoted, but do we just accept being the ‘bad guys’?

With no clear solution, what was unanimously agreed is that disclosure is our license to operate and capital will be allocated to those who disclose. The industry has always been good at self-regulating, so if we do that well we will regain trust. This challenge requires a global approach to build back trust through disclosure, consistency and transparency. It was also seen that embarking on a path toward reduced emissions, renewables, EV stations and other energy efficiency services will help remove the negative narrative.

Consequently, this PR problem is greatly impacting the challenge of talent. If the industry can’t communicate what they stand for then how can we expect the youth of today to be attracted into the sector?

Read part 2 of the takeaways where our advisors’ peer into the rabbit hole of climate change and energy transition, and the future role of gas.